Sri Guru Tegh Bahadur Ji’s supreme sacrifice for the nation and to protect the faith of Kashmiri Pandits earned the coveted title of “Hind-di-Chadar” or the Shield of India. 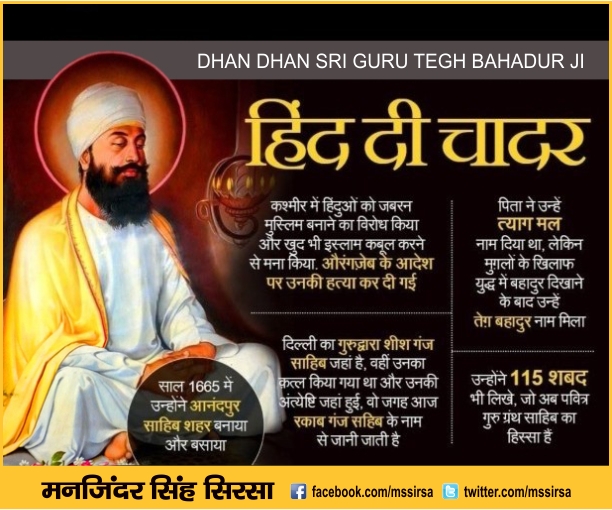 In the entire world, there will be no other example than the supreme sacrifice of Sri Guru Tegh Bahadur who sacrificed himself to protect the integrity and culture of our nation. I pay obeisance to his sacrifice and wish to narrate the story to the younger lot how inspirational the lives of our Guru Sahibs have been!

History accounts for the cruelty of Aurangzeb and how he stated converting Hindus to Muslim religion in all parts of India forcefully. He however could not get desired results while pursuing vigorous conversion of high caste Brahmins of Kashmir. because Kashmiri Brahmins had approached Sri Guru Tegh Bahadur in 1674 AD to save them from Aurangzeb’s ruthlessness.

Guru Sahib chose his son, Sri Guru Gobind Singh Ji, as the next guru of the Sikhs and decided to stand up for the right of freedom of worship. He told the delegation of Kashmiri Pandits to tell Aurangzeb that if he could convert Guru Tegh Bahadur… they would gladly convert too.

Sri Guru Tegh Bahadur Sahib accompanied by five Sikhs Bhai Mati Das, Bhai Dyal Das, Bhai Sati Das, Bhai Gurditta and Bhai Uda were arrested in Agra and brought back to Delhi. Aurangzeb first tried to lure them with riches and upon his failure, forced them to convert to Muslim religion.

To this, Guru Sahib replied, “All men are created by God and therefore must be free to worship in any manner they like.I don’t fear death and am prepared to die.”

Guru Sahib’s fearlessness angered Aurangzeb and he ordered his men to torture Guru Sahib’s followers. His first follower was cut longitudinally into two pieces with a saw by fixing him in wooden planks, another was boiled in water and the third was burnt in cotton wool.

In the end, Aurangzeb ordered execution of Sri Guru Tegh Bahadur. Before He was beheaded, Guru Sahib had tied a small note on a string around his neck. When Guru Sahib’s head was severed, the note was read. It said,

The exact location of the beheading is marked by Gurdwara Sis Ganj in Delhi.

Sri Guru Tegh Bahadur Ji’s supreme sacrifice for the nation and to protect the faith of Kashmiri Pandits earned the coveted title of “Hind-di-Chadar” or the Shield of India.