It is important to make everyone aware of the legend of Chaar Sahibzaade. The more their story spreads, the stronger will be the urge in our youth to return to their roots!

I have been pursuing the cause of creating awareness about the heroic deeds, unparalleled valor and supreme sacrifices made by the revered sons (lovingly called Chaar Sahibzaade) of Sri Guru Gobind Singh Ji who sacrificed their lives for the cause of justice and freedom of religion.

India has always been a nation that stands for peace and humanity. Owing to the influence of western culture, Indian families are struggling to give the right examples to their children. Children are going astray for choosing wrong role models. To save the nation from the bankruptcy of ethical heroes and lack of pride-brimming examples; it is important to make everyone aware of the legend of Chaar Sahibzaade. The more their story spreads, the stronger will be the urge in our youth to return to their roots!

Indian needs to tell the story of Chaar Sahibzaade to the world. It is because of the sacrifice made by Chaar Sahibzaade that the cruel Mughal emperor Aurangzeb had to drop the evil policy of forceful conversion of people into Islam. Chaar Sahibzaade fought for the country and freedom of religion against foreign invaders – Mughals. All of them died as martyrs at a very tender age. 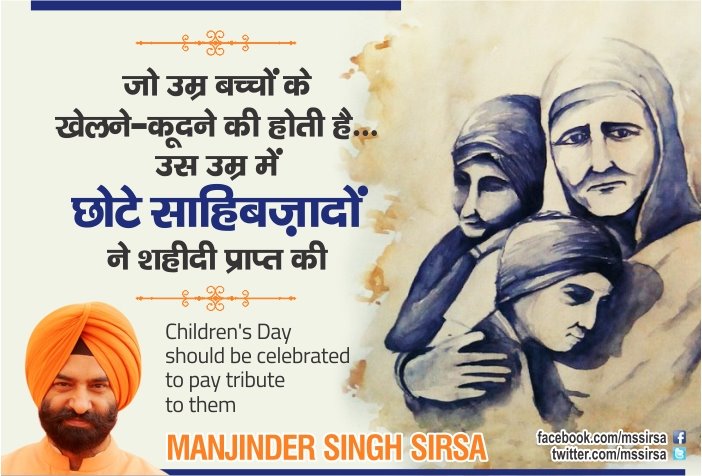 They followed in the footsteps of their grandfather Sikh Guru Sri Guru Tegh Bahadur Sahib Ji who sacrificed his life to fight the Mughal oppression against Kashmiri Pundits. Similarly, Sahibzada Ajit Singh Ji and Sahibzada Jujhar Singh Ji (Age 18 and 14 years old respectively) along with 40 Sikh warriors achieved martyrdom as warriors in the battle of Chamkaur Sahib. While the younger ones, Chotte Sahibzaade, Sahibzada Zorawar Singh Ji and Sahibzada Fateh Singh Ji, were just 6 and 9 years old when they were bricked alive for refusing to accept Islam.

There is no comparison of valor, sacrifices made by them not only in the history of India but also the history of world. Chote Sahibzaade fought like valiant soldiers and chose to be bricked alive but did not bend in front of the threats or lures given by Nawab Wazir Khan of Sirhind.